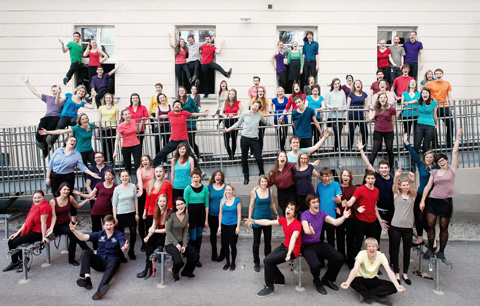 NEUE WIENER STIMMEN is a youth choir that was founded in October 2010 by Jürgen Partaj and Johannes Hiemetsberger with the support of Jeunesse Austria. In weekly rehearsals the young singers study a diverse selection of repertoire and further develop their voices with additional voice training. The singers are from Vienna, or come to Vienna for study/work from other Austrian provinces or internationally. They range from 16 and 26 years of age and are all united by their love of music and a joy for singing.

Despite its brief existence, the choir can look back on many successful concerts. In addition to acclaimed performances at the Wien Museum and the Semper Depot, the choir was invited to perform as part of the “Wiener Stadtfest”, the “Jeunesse” day in the Museums Quartier, the “Karlstag” and the opening of the “Festival der Bezirke”.

As well as the joy of making music together, the young singers are also keen on sharing their music with those who are unable to get to musical venues. Through co-operation with Caritas Austria, numerous concerts and musical gatherings were held in homes for refugees and senior citizens.

Since 2012 the choir is participating in the film music festival “Hollywood in Vienna” taking place each year. Together with the RSO Wien,  Natalia Ushakova, Ildikó Raimondi, Cassandra Steen and David Whitley, all under the baton of David Newman, the NEUE WIENER STIMMEN were part of the film music gala concerts in the Great Hall of the Vienna Konzerthaus. These concerts were recorded by ORF television and radio and broadcasted in several countries.

In April 2013 the first recorded album of the youth choir appeared under the newly founded label "Jeunesse Records", which features live recordings of the ‘Misa Criolla’ by Ariel Ramírez and a selection of international Christmas songs. In May that year the choir embarked on a tour of six concerts throughout Switzerland, Slovakia and Austria, together with the Swiss Youth Symphony Orchestra, which included a live CD recording. The grand finale of the tour was held in the Golden Hall of the Wiener Musikverein.

In season 2013/2014, Christoph Wigelbeyer was appointed artistic director of NEUE WIENER STIMMEN and is now leading the choir rehearsals. Together they have performed at the Vienna Konzerthaus, the MuTh (the concert hall of the Vienna Boys' Choir) and numerous concert venues throughout Austria. Special highlights included a masterclass with the American ensemble ‘Chanticleer’, participating in a production of the “Schauspielhaus Wien” and the opening ceremony of “Life Ball” 2014 and 2015.

This year several concerts throughout numerous states in Austria were and will be performed, addressing the subjects “Liebe” (Love) and “Africa”. Furthermore, the development of a new program “Österreich: Große Töchter, große Söhne!” (Austria: Great daughters and sons) has begun. Together with composers, as well as the youth choir’s singers, a musical reflection from and on the topic of Austria will take place across the centuries, states and musical genres, with a blend of well-known and entirely new musical compositions. Each year NEUE WIENER STIMMEN work on additional projects, and will this year participate in “EXPO 2015” in Milan, “Hollywood in Vienna 2015” and Rock Cantata “The Creation”.

The team at NEUE WIENER STIMMEN consists of Christoph Wigelbeyer, Jürgen Partaj, Helmut Simmer, Elisabeth Sturm, Flora Königsberger, Liga Ausmane and each individual voice of the choir. The youth choir is an initiative of Jeunesse Austria, is supported by the Federal Chancellery of Austria (BKA) and cooperates with institutions such as the “Musisches Zentrum Wien”, wienXtra, the Wiener Jugendzentren and “Hunger auf Kunst und Kultur”. 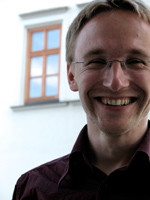 Helmut Simmer was born in Weistrach (Lower Austria) und studied vocal pedagogy for both classical and jazz and popular Music at the University of Music and performing Arts Vienna.

He is working as a vocal teacher at the Music school in Perchtoldsdorf, as well as a Mentor at the University of Music and performing Arts Vienna.

As a singer he is a member of the vocal ensemble „Company of Music“ and the choir „chorus sine nomine“ both directed by Johannes Hiemetsberger. Further he is lead singer of the Band „Funkhouser“ and leads ensembles at workshops and courses like „Jugendsingwoche Großrußbach“ and „Stimmenfestival Freistadt“.