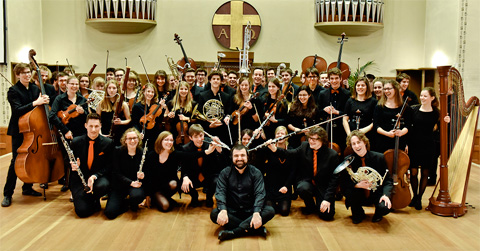 The Youth Symphony Orchestra Arabesque was founded in 1989. It is comprised of string, woodwind, brass and percussion sections that are manned by around 55 young people between 16 and 25 from the Bern, Bernese Oberland, Thun and Burgdorf regions.

The YSO Arabesque is aimed at youngsters over 15 with above-average technical and musical abilities. The kids have to pass an audition to join.

The orchestra's repertoire includes important classical orchestra pieces that require detailed musical studies and stretch each and every member to their personal limits.

One budding professional musician per string section guides the players through sectional rehearsals and concerts and additional players are found to fill empty seats in undermanned sections. In the woodwind and brass sections, only empty positions are filled with external musicians, music students or qualified amateur musicians.

The YSO Arabesque organises regular performances to find more young people who may be interested in joining its ranks to make sure that the Youth Symphony Orchestra remains fresh and dynamic. Mirjam Andrey has been the concertmaster of the YSO Arabesque since March 2013.

Each club member shines through their personal commitment, which enhances the mutual experience. The club also gives members the opportunity to take up an additional special position within the orchestra commission and thus to assume greater responsibility for the orchestra.

Especially talented orchestra members are also provided with lots of opportunities to perform as soloists.

The club is sponsored by three local music schools in the Thun region. The YSO Arabesque unites motivated and extraordinarily talented young people from the regional music schools. Players meet for practice in Thun, the geographical centre of the catchment area.

Two to three projects that consist of several concerts each are organised during school term in the catchment area of the YSO Arabesque.

But the orchestra also likes to play in other cantons and countries. It is always on the lookout for cooperation partners and organises trips to foreign places (such as Austria, Vienna, Finland, Poland and Russia) and joint concerts. The focus of all these activities is on a musical exchange.

The orchestra's highlights of the 2015/2016 season will be its participation in the SCL Festival in Vienna and the New Year Concert in Thun on 1st January 2016. 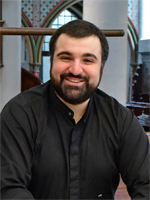 He studied violin, viola, composition and conducting in Detmold, Geneva, Bern, Luzern and Milano. He studied conducting at the Hochschule der Kunst Luzern with R. Weikert and at the Conservatorio G. Verdi with V. Parisi.

In 2015 he has been one of the 4 conductors selected by Maestro David Zinman to Participate to the International Conducting workshop with NAC Orchestra in Ottawa (Kanada). Georgios has also been selected to participate to the prestigious Jarvi Conducting Academy 2014 (Pärnu) and to the Menuhin Festival Conducting Academy 2014 and 2015 in Gstaad to study with N. Jarvi, L. Grin, G. Roshdetnevsky. Since 2011, he has been accepted to study at the prestigious Academia Chigiana with Maestro G. Gelmetti. As well he attended International Masterclasses by J. Panula, M. Yurowski, G. Albrecht.

During his studies he has been awarded by various foundations (Lyra Foundation, Hirschmann Foundation, Onassis Foundation, IKY etc.). At the age of 19 he has been the youngest member of the Symphony orchestra Basel. In 1999 he won the first prize of the National String Competition of the Greek Cultural Minister. One year later he received from the same organization (category Composition) a first prize for his String Trio (1999). As a chamber musician he played in Prag Spring Festival 2010, the Dresdner Festspiel, Moritzburg, as well as in various other important festivals in Europe. Since 2010, he is Conductor of J.S.O Arabesque (CH), guest conductor at the National Opera O. Danovsky (2013-14). He conducted various Orchestras as the NAC Orchestra (Ottawa), Gstaad Festival Orchestra, the Lithuanian State Philharmonic, the Sofia Festival Philharmonic, Orchestra Verdi di Milano, Orchestra dei Pomeriggi Musicali di Milano, Orchestra Sinfonica di Sanremo, the Athens Symphony Orchestra, the National Opera O.Danovsky (RU) and more.