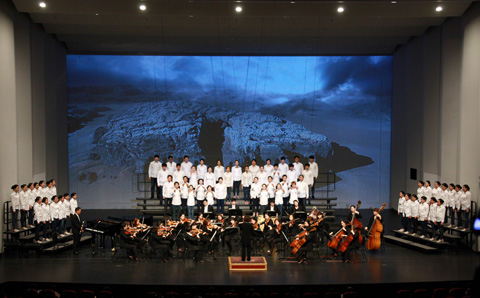 The Daejeon Civic Youth Choir, “The dream tree in Deajeon” was established in 1982. The Choir with its exceptional skills and advanced techniques creates a new landscape in choir culture through its more than 30 regular concerts, special concerts and charity concerts each year.

The Daejeon Civic Youth Choir expanded its sights in 1998 appearing at the 14th International Youth Music Festival in Kumamoto, Japan. They have premiered two musicals “The singing songs. Calling all kinds of birds” in 2000 and “The lightning beetle’s songs” in 2009 which gained much recognition and praise for building up character for young people. They also have appeared at the Edinburgh Festival and Chichester as cultural ambassadors.

As a representative of Korea Choirs, the Daejeon Civic Youth Choir participated in the World Symposium on Choral Music in August 2014 and performed together with the world’s 19 most prominent choirs and came into the spotlight.

Under the slogan, “The soaring Daejeon, achieving citizen’s dreams” the DCYC will be reborn as the beloved choir of all the Daejeon citizens through creative and interesting program. 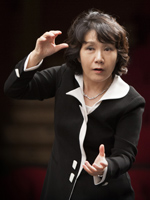 Deokkyu Kim holds degrees in music composition from the Mokwon University (Korea), and the Regensburg Universität (Germany). She also studied choral conducting at the University of Southern California (U.S.A)

On the basis of her expertise in heart-based leadership, the choir has participated in music festivals and performed successfully in Japan and the United Kingdom. She served as a guest conductor of the Saint-Petersburg National Choir, the Uzbeck National Chorus, and the Vancouver Chamber Choir. She has received many awards in choir competitions including the Korean minister of education prize, the president of Hankook Daily Newspaper prize, and the president of Korea Broadcast Service prize. Furthermore, as a professor, she opened a new graduate course in choir conducting at Joongbu University.

Deokkyu Kim is an active member of the International Choir Olympic Committee and the longest serving artistic director and conductor of the DCYC.