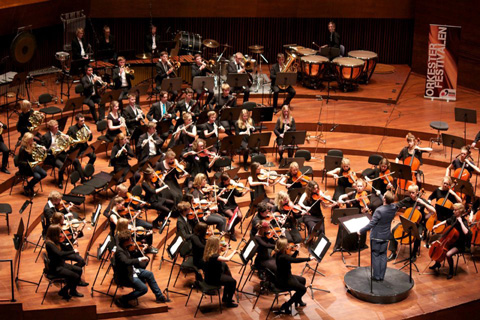 Sankt Annæ Youth Symphony Orchestra (SASO) was founded in 1995. SASO is one of the leading youth symphony orchestras in Denmark and presents a full symphony orchestra with almost 70 members from the age of 15 to 24. Every member has to pass an audition to be accepted in the orchestra. Most of the members are students at Sankt Annæ Gymnasium but the orchestra is open to young musicians studying elsewhere.
Every year SASO performs around 8 concerts and furthermore they cooperate with The Royal Ballet School in Copenhagen, TIVOLI Festival and the DR Concert House.
SASO has performed masterpieces such as Tchaikovsky's 6th Symphony and Dvorak's 8th and 9th Symphonies, Gershwin's An American in Paris, Beethoven 3rd and 5th Symphonies.
Every second year SASO tours different parts of Europe. SASO has visited Holland, Sweden, Italy, Slovenia, Hungary, Czech Republic and Germany. Furthermore, SASO has visited every part of Denmark. 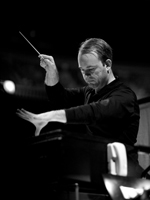 Frederik Støvring Olsen was born in Denmark in 1981. He graduated from The Royal Academy of Music in Copenhagen in trumpet performance in 2007 and subsequently focused his studies on conducting, studying with Kirk Trevor privately and in workshops in New York City and Czech Republic.
In 2012 he earned an Advanced Postgraduate degree in orchestral conducting from The Royal Acadamy of Music in Copenhagen. While there, he studied with Giancarlo Andretta, Giordano Bellincampi and Michael Schønwandt. As a part of this intense program he has worked with almost all major professional orchestras in Denmark.
In June 2012, he had his debut concert with Aarhus Symphony Orchestra with music by Danish composer Hans Abrahamsen, Tchaikovsky and Korngold.
In the summers of 2011 and 2012 he worked as Assistant Conductor for The Missouri Symphony Orchestra (USA) conducting a great variety of chamber concerts, family concerts, pop and classical concerts.
In addition to the traditional repertoire, Olsen is known for his expertise in contemporary music. He has led numerous premieres of works by young Scandinavian composers conducting in festivals as PULSAR and Young Nordic Music and with ensembles as Scenatet and ATHELAS Sinfonietta.