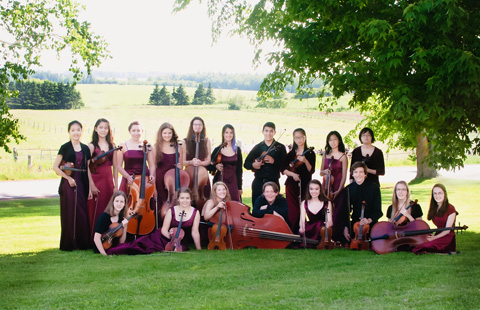 The Senior Singing Strings, under the direction of Natalie Williams Calhoun, is part of the Singing Strings organization which is now in its 36th year. It is based in Canada’s smallest province, Prince Edward Island, which has a population of less than 150,000. The orchestra was originally part of a school group-taught music program, founded in 1978 by directors John and Jenet Clement, who are still with the organization. In 1999 the program became independent of the public school education authority and the Singing Strings now gives individual instruction in a conservatory system to students from 6 to 18 years of age and adults as well. Each student also plays in one of the three orchestras according to their level, regardless of age.

In such a small Province, where there are few trained string players, the students have more opportunity to develop their performance skills than they would have in a larger centre. As a result, from the start the Singing Strings became very active in the community and performed for Brownie teas, Pancake Breakfasts and Senior Citizens’ Parties as well as important events like Royal Visits, Government banquets and conventions and meetings that visit Charlottetown. The Singing Strings have twice represented Canada at the World Congress of the International Society for Music Education: first in Eugene, Oregon, USA (1984) and then in Amsterdam, the Netherlands (1996). In 2008 the Singing Strings represented Eastern Canada at the 10th International Festival of European Youth Orchestras in Florence, Italy. 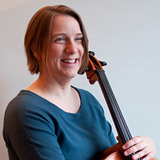 Natalie completed her Master of Music degree in Violoncello performance at the Royal Northern College of Music in Manchester, England, and her Bachelor’s degree in Cello at the University of British Columbia in Vancouver, Canada. Her professional career led her from performing in a UK based piano trio during her time in Manchester to positions as a cellist in professional orchestras in Ontario (the National Ballet of Canada orchestra, the Kitchener Waterloo Symphony and Orchestra London Canada), Nova Scotia and Prince Edward Island.

Natalie has extensive experience working with musical youth; as a private teacher, a conductor and an examiner across Canada with the Royal Conservatory of Music.  Her teaching studio consists of students in both piano and cello as well as rudiments, history and harmony within the Royal Conservatory of Music syllabus. Natalie has conducted youth orchestras in Timmins, Ontario (at the Geoffrey James Lee School of Music associated with the Timmins Symphony Orchestra); Brantford, Ontario (both the Brantford Youth Symphony Orchestra as well as the Little String Orchestra, Junior Division) and now in Charlottetown, PEI. A practical strings examiner since 2008, Natalie enjoys traveling the country and listening to string students perform in music examinations as well as music festivals.