This band was formed in 1938, before Yokohama Vocational School became Kanagawa University. It was suspended temporarily due to the social climate during and after World War II, but re-formed as the Kanagawa University Symphonic Band in 1954. Since then, the band has performed in a wide range of settings, including two annual concerts planned by the band itself – a regular concert and a summer concert – as well as concerts throughout Japan, university events, parades such as the Yokohama Port Opening Memorial Festival, music appreciation classes for children, local events and commissioned events. It also performs in and sponsors concerts for the popularization and revival of symphonic bands and has given a large number of model performances in instructional videos for band lessons and recorded many reference performances of musical pieces. It has even released 17 original CDs, all of which have received high acclaim.
The arrival of the band’s current music director and conductor, Toshiro Ozawa, saw the band win the Gold Prize in the All Japan Band Competition for the first time in 1978. Since then, the Kanagawa University Symphonic Band has won the Gold Prize a total of 26 times, including two five-year streaks of consecutive wins – more wins in the university band division than any other band. The band has also given two model performances at the competition.
The Kanagawa University Symphonic Band gave its first overseas performance in 1990 with a North American tour, including being invited to perform at the College Band Directors National Association (CBDNA) National Convention in Minnesota, USA. This was followed by a performance in Honolulu, Hawaii in 1996, an appearance in the 114th International Brass Band Competition in Valencia, Spain in 2000 (in which the band placed second in the Special Division), appearances in the 11th World Association for Symphonic Bands and Ensembles (WASBE) Conference in Sweden and the 6th Mid Europe Festival in Austria in 2003 and the 58th Midwest Band Clinic in Chicago, USA in 2004. The band also won first prize in the First Section of the 37th WASBE Conference in Altea, Spain in 2008 and held a highly acclaimed concert in Dunkirk, France, which was endorsed as part of celebrations commemorating the 150th anniversary of Franco-Japanese relations. In 2012, the band successfully planned its own performance in the Berlin Philharmonic Concert Hall and gave its first symphonic band performance at the Prague Spring International Music Festival in the Czech Republic. These events attracted much attention and acclaim, and were even featured in local media. The band won the Performance Award in the 14th Jas-Wind Academy Awards for its highly acclaimed performances of Japanese symphonic works in a wide range of overseas locations. 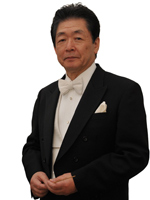 Born in Chiba Prefecture, Toshiro Ozawa studied trumpet under Kazuhiko Ogawachi and harmony under Bin Kaneda and has played the trumpet in orchestras such as the Japan Philharmonic Orchestra and Tokyo Philharmonic Orchestra. He has dedicated himself to the popularization and revival of Japanese brass bands, including working as a concert master and being involved in the formation of the Tokyo Brass Society brass band along with other music experts such as Fujio Nakayama, Professor Emeritus of Tokyo University of the Arts. He has worked as a music teacher for Japan Instruments (now Yamaha) as well as conducting the brass band of Choshi Commercial Senior High School in Chiba Prefecture and the Kanagawa University Symphonic Band. An immense number of bands have flourished under his direction, with achievements such as three five-year stretches of wins at the All Japan Band Competition. He has used his extensive experience in the supervision and editing of many instructional books and videos, and his accomplishments in this area were recognized when he was presented with the Research Award in the 5th Jas-Wind Academy Awards in 1994.
He has conducted the Kanagawa University Symphonic Band since 1976 and became the music director in 1984. He has led the band to a total of 26 Gold Prizes at the All Japan Band Competition, more wins in the university band division than any other band. He is currently the music director of the Kanagawa University Symphonic Band, a visiting professor at Shobi University, the conductor of the Shobi Wind Orchestra, the Chief Director of the Japan Academic Society of Wind Music, a representative of the Japan Band Clinic and a representative of the planning committee for Prosperous Future for Band Into the 21st Century.