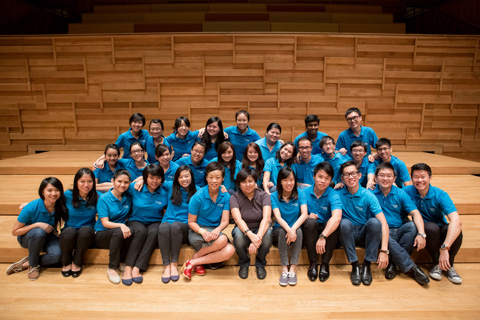 The Singapore Management University (SMU) Chamber Choir was formed in May 2007 by five enthusiastic choristers who were invited to represent SMU in the Singapore Chorus of Russian composer Vladimir Martynov's 'SINGAPORE' Symphony, held at the Esplanade Concert Hall. The Singapore premiere was graced by President S.R. Nathan and Minister Mentor Lee Kuan Yew.
Since its commencement, the Choir has grown in strength and is one of the most prestigious arts clubs in SMU, having been inducted into the University's Arts Excellence Programme. With its young and vibrant group of music-makers, the Choir continues to advance in its journey towards music excellence.
The Choir celebrated its first anniversary in May 2008 by participating in the 4th International Choir Festival Mundus Cantat Sopot, clinching 2 Silver Diplomas in the Sacred and Folk categories. In 2009, the Choir participated in the 3rd Grand Prix St. Petersburg, achieving 2 Silver Cups of Peter the Great. In December 2011 the Choir brought honour to the University by clinching 2 Gold Medals at the Music in Prague, Czech Republic. In May 2013, the Choir participated in the 10th International Choir Festical- Mundus Canatat Sopot and clinched 2 Silver Diplomas, once again in the Sacred and Folk categories. 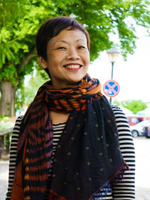 Jennifer has been with the SMU Chamber Choir since their formation in 2007, directing them in big and small performances, at home and on tour in Poland, Russia, Indonesia and the Czech Republic.
Jennifer has chaired and spoken on panels in Singapore, Sweden, Estonia and Copenhagen, was principal lecturer at the 2008 Lithuanian Conductor Summer Academy, hosted by the Lithuanian Choral Union and the Ministry of Culture, and presented lectures and reading sessions on Singapore choral music at symposia in Croatia and USA. She has taught choral direction and pedagogy at the Nanyang Academy of Fine Arts, and given workshops and short courses to conductors at home, in Japan and Indonesia.
Jennifer has been on competition juries in Austria, China, Germany, Indonesia, Japan, Korea, Malaysia, Norway and the USA; and serves on the World Choir Council, representing Singapore. She is an elected Board member of the International Federation for Choral Music, and coordinates the Asia Pacific Working Committee which looks after the Asia Pacific Youth Choir, and organizes biennial regional summits.
In 2012, Jennifer was conferred the nation's highest artistic accolade, the Cultural Medallion, by the President, Republic of Singapore.