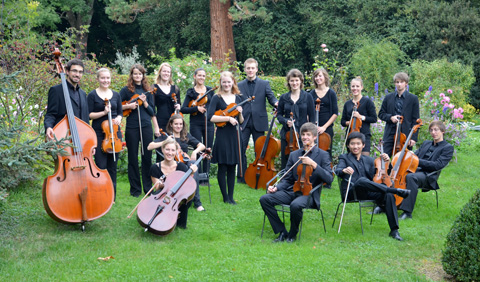 After winning the German Orchestra Competition in 2008, the Junge Kammerphilharmonie Rhein-Neckar can be called one of the best young chamber orchestras in Germany. The orchestra was founded in 2002 at the Music School Heidelberg and has been under the leadership of conductor Thomas Kalb since 2007. who served as General Music Director of the City of Heidelberg and Principal Conductor of the Heidelberg Philharmonic Orchestra for more than a decade.

The Junge Kammerphilharmonie Rhein-Neckar is made up of young talented musicians, who are some of the most advanced students in the Rhine-Neckar and Neckar-Odenwald regions, having received numerous prizes in Germany’s national competition for young musicians.

Next to studying all kinds of different subjects at school or university (e.g. physics, law, psychology) the musicians are united by their ambition to play music on a very high level. For that purpose they come together from all over Germany for intense weekend-rehearsals once a month in order to prepare demanding repertoires, which are then presented in Germany and abroad.

In 2010 the Junge Kammerphilharmonie Rhein-Neckar was invited to internationally renowned music festivals such as the "Heidelberg Spring Festival" (April 24th) and the "Carinthian Summer Festival" in Austria (July 26th).

From August 24th to September 12th 2010 the orchestra toured through Canada with performances in Toronto, Brockville, Niagara Falls, High River, Kamloops and Langley. In 2011 the orchestra premiered Théodore Gouvy's e-minor quintet at the "Institut Théodore Gouvy" in Homburg-Hout, France, and returned − on invitations by the German embassy in Washington, D.C. and the Ontario Philharmonic Orchestra − for 2 joined performances of Beethoven's 7th symphony and another tour with numerous performances in Canada and the USA.

In the summer of 2013 the orchestra set out to New Zealand for a three-week concert tour with 19 performances amongst others in Wellington, Christchurch, Hamilton, Napier and Dunedin.

Performing works of unknown or forgotten composers (such as Louis Théodore Gouvy, Arkady Filippenko or Guillaume Lekeu) is of particular importance to the orchestra, as are the regular charity concerts organized by the Lions- and Rotary-Clubs.

In 2015 the orchestra will play the string simphony No. 9 by Mendelssohn, the „Sonata for Strings“ by William Walton and an arrangement of the string quartet in g-minor by Edvard Grieg. Next to concerts in Germany, Switzerland, Austria and a concert tour through France in August the Junge Kammerphilharmonie Rhein-Neckar is planning to participate in the German Orchestra Competition 2015/2016. 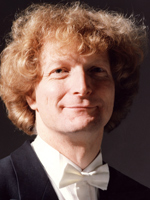 In 1993 Thomas Kalb was appointed General Music Director of the Heidelberg Philharmonic Orchestra which made him the youngest ever Music Director of the Federal Republic of Germany. His extraordinary artistic and organisational abilities earned him two contract renewals in this position.
After eleven years in Heidelberg, Thomas Kalb turned to an exciting career as a guest-conductor. His many duties have included international concert engagements as well as long-term engagements such as an annual alternating production at the Bregenz Festival Theatre (Festspielhaus Bregenz) where he recently conducted 'Salome'. As a guest-conductor, Thomas Kalb has regular engagements with Symphony Orchestras and Opera Companies in international capitals such as Antwerp, Bayreuth, Berlin (Komische Oper), Birmingham, Bregenz (Festival Theatre), Bremen, Florence, Frankfurt am Main, Hamburg, Hanover, Luxemburg, Milan, Mexico City, Munich, Nuremberg, Schwetzingen, San Remo, Seoul and Tokyo. Furthermore, he also conducts numerous radio and television productions in Germany and abroad. Many premieres of both opera and concert strengthened his considerable reputation as a conductor of complicated and multi-layered scores.
Thomas Kalb's broad scope of activities has earned him many prizes and awards including the Masefield Scholarship (1981/82), the Richard-Wagner-Scholarship (1986), the First Prize in the Conducting Competition of the German Council for Music (1987), the Prize of the German Music Publisher's Association for "Best Season Program" (1994/95) and the Prize from the Opernwelt for Best Orchestra Performance in Ligeti's 'Grand Macabre' (2001). He was also the music director of a production of Wagner's 'Tannhäuser' which was awarded the annual Prize of the Götz-Friedrich-Foundation for "Best Opera Production" (2004).
After Thomas Kalb won the Conducting competition of the German Council for Music in 1987, nobody less than Sergiu Celibidache was so impressed by his artistic abilities that he had invited him to conduct the Munich Philharmonic on the occasion of the 1989 celebrations of the 40th Anniversary of the German Basic Law at Beethovenhalle Bonn. This event was on air in a live-broadcast of the Second German Broadcasting Corp (ZDF).
Thomas Kalb studied piano, bassoon, conducting, composition and music theory at the State College for Music and Performing Arts in Hamburg. Already at an early age he received performance and conducting engagements at the Hamburg State Opera, the Eutin Summer Festival, the Schleswig-Holstein Theatre and the Ulm Theatre. Following his studies, he accepted the position of Principal Conductor at the State Theatre in Munich (1990-1992) and the National Theatre in Mannheim (1992-1994).
In 1996, Thomas Kalb created the music festival 'Heidelberger Frühling'. Under his artistic direction, this annual festival developed into an internationally highly acclaimed cultural event within a very few years.