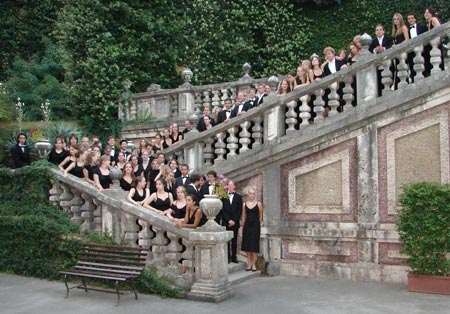 It is the aim and ambition of Viotta to optimally develop the musical talents of its members, who are being challenged regularly to demonstrate their musical competencies in order to monitor their progression through the ranks. The repertoire of the orchestra covers amongst others the romantic classic masterpieces and more modern compositions. The orchestras’ level has progressed very well in recent years. It performed major works of Stravinsky (Firebird), Mahler, Bruckner, Rachmaninov and Sjostakowitch with great success.
During several European tours the orchestra could be admired in major concert halls, amongst which Smetana Hall in Prague, The Royal Concertgebouw in Amsterdam, Palau de la Musica in Valencia and concert halls in Florence, Vienna and Aberdeen.
On its 2003 European tour the Viotta Youth Orchestra performed Mahler’s’ 4th Symphony in Vienna, which was broadcasted live by the Austrian ORF. The orchestra can also be seen on Dutch television, most recently in the youth programme “Klokhuis” that portrayed the role of “the conductor” In cooperation with the Princess Christina Concours, Viotta provides the opportunity to promising young participants of this musical contest to perform as a soloist together with the orchestra.
Every second year the Viotta Youth Orchestra goes on a European tour. On a more regular basis it delivers concerts throughout the province of Zuid Holland. Moreover every once in a while an instructive excursion is being organized to rehearsal sessions of professional musical companies, e.g. The Dutch Opera, The Residentie Orchestra and the Dutch Philharmonic Orchestra. Annually Viotta organizes a rehearsal weekend in a youth hostel, whereas for social bonding the members of the orchestra have the possibility to enjoy a collective meal each month. 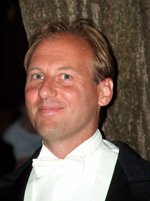 Dick van Gasteren started his musical education as a cellist at the age of nine. He continued his study at the Royal Conservatory in The Hague with Anner Bijlsma and finished his studies and took his certificate in 1988. As a cellist he gave many recitals, among others in the Amsterdam Concertgebouw. Already at the age of fourteen conducting got his attention. He followed his study orchestra conducting with the conductor Jan Stulen en took his certificate in 1990. In the summer of that same year, van Gasteren was Laureate with the famous Conductors-master class in Siena with Ferdinand Leitner. At this occasion he was selected to conduct the final concert for Italian television. One year later he was laureate again, this time with the Vienna master class. After his study at the Royal Conservatory, van Gasteren received a special scholarship of the Dutch Ministry of Culture to attend lessons of Bernard Haitink. Later he became his assistant, among others with the Royal Concertgebouw Orchestra during the great Amsterdam Mahler festival where he was allowed to conduct the Fern-orchestra. This production is a part of the great Mahler-television-documentary. In the Netherlands van Gasteren conducted among others the Limburgs Symphony Orchestra and the Noord-Hollands Philharmonic Orchestra. In Germany he conducted many opera productions at the Oldenburgisches Staatstheater. These productions received most positive critiques in the press. In the autumn of 2000 his interpretation of Stravinsky’s Firebird was so successful that he was asked back and within a few months he conducted there again. Ever since he is a very frequently seen guest. In following seasons van Gasteren had many invitations amongst others from the Nurnberger Symfoniker.

In November 2003 Dick van Gasteren performed, with the Viotta Youth Orchestra, in two episodes of “Klokhuis” a Dutch television program for children, in which the profession of conductor was portrayed.