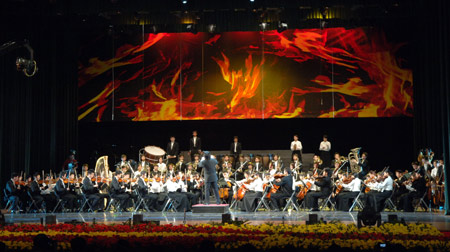 Shenzhen Experimental School was founded in May 1985, which consists of four separate departments of a primary school, a junior middle school and a senior high school. It is a fine quality experimental and demonstrative school under the direct leadership of Shenzhen Educational Bureau and has been granted First Level School of Guangdong Province with more than 7000 teachers, staffs and students. It is an outstanding school.
The Students Philharmonic Orchestra of Shenzhen Experimental School was set up in 1993. It has become a large scale students' philharmonic orchestra with excellent combination and disposition of sound scales and fine musical instruments after ten years of development and consolidation. The orchestra consists of two parts: the tube philharmonic orchestra, and the wind and string. The players of the orchestra are all students in our school. There are over 80 players in the tube part, whilst more than 120 in the wind and string part.
Our orchestra had reached the standard of performing multiple master pieces, and has won two honors: The first prize of Instrumental Music Tutti in Guangdong Province High School Students Art Show and The first prize of Instrumental Music Tuttic in National High School Students Art Show in March, 2007. We have staged many exclusive concerts and won many prizes in a variety of competitions, and performed in many local important cultural events. The orchestra has been invited to perform in Australia, France, Korea, Hong Kong and Taiwan.
With its unique charming style, the school band has gained the popularity and reputation wherever it performs. 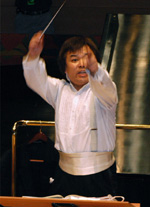 Winner of Outstanding Conductor Award by the Ministry of Culture, PRC, Mr. Jiang is currently the Resident Conductor of China National Chinese Opera and Dance Drama Company, Pluralistic Professor of Conducting Department at Central Conservatory of Music (CCOM), Director of Music and Art of China Youth Symphony Orchestra at CCOM, Conductor and Professor of EOS Orchestra Academy at CCOM.

Mr. Jiang has appeared on concert stages with almost all the major symphony orchestras in provinces and cities, such as Shanghai and Beijing. His performance has won him excellent evaluation. Mr. Jiang is considered the one who conducted the most symphony orchestras in China and the most Chinese works. His conducting is being widely focused in the world stage. He has made successful performances in Asia: Tokyo, Osaka, Nagoya, Seoul, Hongkong, in Europe: Paris, Lyon, Brussels, Cologne, Frankfurt, Vienna, Salzburg, Italy, etc and performed in many famous concert halls over the world, including Lincoln Center in New York, Walter Disney Concert Hall in Los Angeles.

In 2005, Mr. Jiang successfully performed the Yellow River Cantata in the Walt Disney Concert Hall in Los Angeles. Mr.Jiang was awarded the Honorary Citizen by the mayor of City of Monterey Park. The local magazine 'Chinese Impressive Manners' made an exclusive interview Walking on the way to be a maestro. This concert was considered 'Magnificent of the music, honor of the nation'.
In the same year, he was invited by the United Nation to conduct modern Chinese musical Mu Lan Shi Pian in the prestigious Lincoln Center with New York Philharmonic and the Chorus of Juilliard Music School, as part of United Nation's 60th anniversary celebration. He was awarded the title culture Ambassador by both the United Nation and Lincoln Center.
From 2005-2008, Mr. Jiang is the Visiting Scholar of Juilliard Music School and the School of Music of University of Southern California.