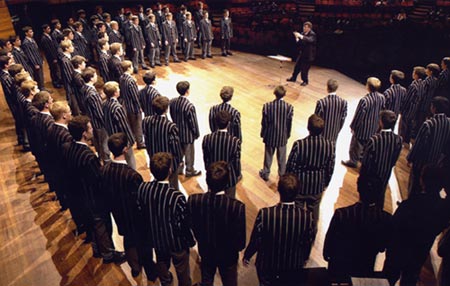 Christ's College was established in 1850 as part of the Canterbury Church of England settlement. The College has throughout time developed into one of New Zealand's leading boys schools. As an independent Anglican school for boys it draws its 640 students not only from Canterbury but also all over New Zealand and abroad.

While it has preserved tradition, it has been innovative and a leader in many fields of boys education. Its campus occupies a prime site beside Christchurch's picturesque Hagley Park, and has been described as containing 'the finest collection of buildings in New Zealand' where the modern have been aesthetically blended with original heritage buildings.

The Chapel choir is one of the largest male voice chapel choirs in the country. Comprising 108 members, it is an auditioned choir ranging in age from 12 to 18 years, representing all levels of the college community. Positions in the choir are keenly sort after with many of its members being leading sportsmen, academic scholars as well as music scholar. Singing in four to eight parts with trebles, altos, tenors and basses, their repertoire not only reflects the college's Anglican heritage, but it also encompasses a range of sacred and secular works from leading New Zealand and other contemporary composers. Commissioned works by leading New Zealand choral composers Patrick Shepherd, Chris Archer and David Hamilton are included in their repertoire.

Established over 150 years ago as musical leadership to the regular chapel services, the chapel choir leads the school in their weekly Eucharist and Evensong services. They can be heard in services and concert work throughout the city and on national radio and television. They are also in constant demand to perform at both civic and public functions. In recent years they have combined with the Christchurch Symphony Orchestra and Christchurch City Choir in performances of Christmas Crackers [2004], Orf's "Carmina Burana" [2005] and the Mozart "Requiem" [2006], they performed with the Welsh National Male Voice choir [2004], sung at the rugby test match between the All Blacks and the Springboks [2004], performed with the Lions Rugby Tour choir [2005] and were part of the massed choir when the Vienna Boys' Choir visited Christchurch [2005].

The choir has toured several times within New Zealand and Australia. For the last four years they have been selected as one of the top sixteen choirs to participate in the highly competitive national finale of the NZ Secondary Schools Big Sing Choral competition. In 2004 and 2005 they gained Silver awards. 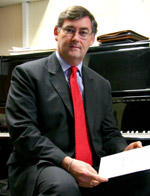 After graduating from the University of Canterbury with a Bachelor of Music with Honours degree, a Diploma of teaching with Distinction from the Christchurch Teachers College, and obtained his ATCL, LTCL and LRSM Diplomas in piano and voice, Robert has specialised in teaching music at the secondary level. Positions in Timaru at Mountainview High School, at Ashburton College and Rangi Ruru Girls' School in Christchurch led to his appointment in 2003 to his current position at Christ's College as Director of Music. From 2004 to 2006 Robert was a guest lecturer at the University of Canterbury in their choral programme. Throughout his teaching career he has been contracted as an adjudicator at various festivals and competitions throughout New Zealand and continues to work with both the Ministry of Education in curriculum writing and the New Zealand Qualifications Authority.

Robert has been passionate about the importance of providing musical opportunities for students to excel in music. Singing is one medium that is assessable to all students. Throughout his teaching career, Robert has fully utilised his choral and singing skills to develop fine choirs in each of the schools he has been in. His choirs over the years continually obtain Gold and Silver awards at the NZ Secondary Schools Choral Festivals and have undertaken many overseas tours. Prior to attending the Summa Cum laude International Youth Music festival in Vienna the choir will present concerts and services in the United Kingdom, at Notre Dame and the American Cathedral in Paris, in Lucerne, and in Salzburg.

As a past foundation member of the National Youth Choir of NZ, conductor of a number of community and civic choirs, and working as church musical director and organist, Robert has given strong musical leadership over a number of years to a large number of groups. He is a past musical director of the Christchurch Schools' Music Festival in which some 5,000 students perform over 6 nights in the Christchurch Town Hall. This Festival plays a significant roll in the musical life of students in Christchurch and has been compared to many international youth Festivals. In 2002 and 2005 he was involved with the national tour of the Vienna Boys' Choir in selecting repertoire for the NZ schools choir that performed in each centre throughout the country and directing the Christchurch performances. In 2004 the University of Canterbury awarded Robert the Vernon Griffiths graduate prize for outstanding musical leadership. This prestigious award is granted to music graduates from the university who over their career have demonstrated leadership on a national and international level in any area of the music profession. Recently in 2007 he has been appointed the Musical Director of the prestigious New Zealand Male Voice Choir which meets throughout the year for national concert and tours. In September this year he will lead a tour of the choir through Melbourne and the state of Victoria, Australia.