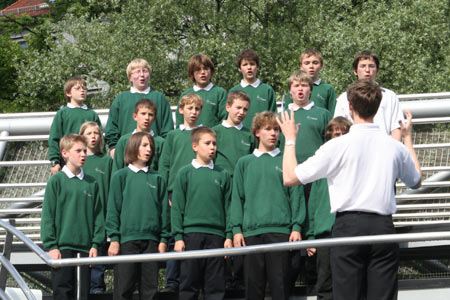 The Grazer Kapellknaben Choir was founded in April 2003 by Matthias Unterkofler, and has since grown to become Styria's largest boys' choir, dedicated to solo and ensemble training. There are a hundred boys in the choir, divided into four levels, the Vorchor (beginners), Aufbauchor (elementary), Hauptchor (intermediate) and the Konzertchor (concert choir), who are trained by the choir director and four voice trainers. In addition to weekly choir practice, all the boys are given individual voice training. Members of the choir come from the city of Graz and its surrounding districts.

The Grazer Kapellknaben Choir has performed throughout Styria: in 2004 it put on two performances of Mahler's 3rd Symphony, in the Graz Stefaniensaal and in the Wiener Musikverein; on 24 December 2005 the choir took part in the television production 'Licht ins Dunkel'.

Soloists from the choir sing with the Graz Opera (in 2004/05 as the shepherd boy in Puccini's Tosca and in 2005/06 as the three boys in the Magic Flute), in the Styriate (Styria's annual music festival), and in the Vienna Volks- Opera (in 2006/07 and in 2007/08 as the elves in Britten's Midsummer-night's Dream). The choir went to Greece over the New Year period 2006/07, its first foreign tour. In 2006/07 it was also involved in the production of 'Der Besuch der alten Dame' at the Graz Spielhaus Theatre. 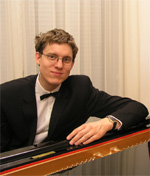 Matthias Unterkofler was born in 1978 in Graz and read church music at the University of Music and Performing Arts in Graz, where he studied under Josef Döller (choir directing) and Michael Kapsner (organ) and was awarded a diploma in church music with distinction in 2002.

Conducted works: choral and orchestral masses by Mozart, Haydn and Schubert; the Creation and symphonies by Haydn, the Fireworks Music, the Messiahs, Samson and Judas Maccabeus, by Handel, the Magnificat and Glorias by Vivaldi, the Christmas Oratorio, St Matthew Passion and Motettes by Bach, Symphony No 2 'Lobgesang' and Paulus by Mendelssohn Bartholdy, Requiem, Davide penitente, Mass in C minor and the Jupiter Symphony by Mozart, the 5th and 7th Unfinished Symphonies by Schubert, A German Requiem by Brahms, the 3rd Piano Concerto by Beethoven and Swanlake by Tchaikovsky.