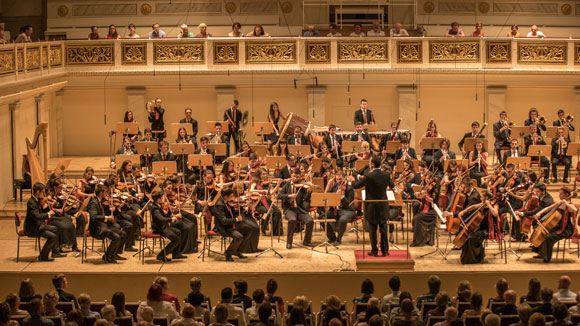 The Pioneer Youth Philharmonic was founded in 1952 by the famous Bulgarian conductor Vladi Simeonov. The young musicians have played in Belgium and Austria, Germany, West Berlin, Brazil, Italy, Switzerland, Austria, Scotland, USA, Mexico, France, the UK and others. Before the concerts in the United Nations’ Hall in 1979 while listening to the orchestra, Leonard Bernstein expressed the desire to conduct it. After conducting a rehearsal with the orchestra Leonard Bernstein wrote: “This is not a Pioneer orchestra – this is the height of civilisation”. The orchestra stopped its activities in 2003 but thanks to 'Vladi Simeonov' Foundation the orchestra was re-established in 2008. During 2008-2009 conductor of the orchestra was Maestro Boris Spassov. In the period 1st to 13th August 2009 the “Pioneer” Philharmonic Orchestra participated in the 20th edition of the European Festival of Youth Orchestras Eurochestires in France. Since 2010 Conductor of the Pioneer Philharmonic Orchestra has been the young and talented Bulgarian conductor and composer Lybomir Denev JR. Presently the orchestra performs annual concerts in the framework of the festival “Sofia Music Weeks”. Several successive years the orchestra has participated in the Festival “Varna Summer” with its own concerts and also as the bulk of the Balkan Symphony Orchestra created with the support of the “Prof. Vladi Simeonov” Foundation, which includes young musicians from Bulgaria, Serbia, North Macedonia and Greece. In 2016 the “Pionner” Philharmonic Orchestra performed with great success a concert in Konzerthaus, Berlin at the Young Euro Classic Festival. The organizers have selected 5 out of the 21 concerts of the Festival which were broadcasted by Deutschlandradio Kultur. The “Pionner” Philharmonic Orchestra was awarded with the prize “Crystal Lira” in the category “Orchestras” for 2016. This prize is annually awarded in different categories by the Union of the Bulgarian Musicians and Dancers. On June 30th 2018 the “Pioneer Philharmonic Orchestra performed in a concert in Sofia together with the Royal Concertgebouw Orchestra in the framework of the “Side by side” initiative. 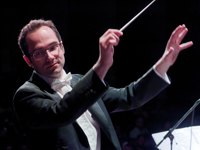 Lyubomir Denev JR is a conductor and composer born in Sofia, Bulgaria in 1988. In 2019 he was awarded third prize at The Los Angeles Conducting Competition. He has been the principal conductor of Pioneer Youth Philharmonic since 2010 and was co-founder, music director and principal conductor of Sofia Session Orchestra at the recording company Four For Music from 2012 to 2019. Lyubomir Denev became the principal conductor of Pioneer Youth Philharmonic after a short assistantship of Maestro Boris Spasov in 2009. The orchestra performed dozens of concerts under the baton of Lyubomir Denev in many festivals and concert halls, among them – Young Euro Classic – Berlin, Budapest, Sofia Music Weeks, Varna Summer Fest and more. Lyubomir Denev prepared the orchestra for RCO Meets Europe project 2018. Pioneer Youth Phil performed Mozart’s Don Giovanni Overture, side by side with Royal Concertgebouw Orchestra under the baton of Maestro Daniele Gatti. Denev has been guest conductor in many orchestras in Bulgaria among them Sofia Philharmonic Orchestra, The Symphony Orchestra of the Bulgarian National Radio, Big Band of the Bulgarian National Radio, New Symphony Orchestra. As a guest conductor at Rousse State Opera House Denev conducted stage performances of ‘La Traviata’ by Verdi and ‘The Elixir of Love’ by Donizetti. Denev’s works, arrangements and orchestrations have been performed and recorded by London Musical Theatre Orchestra, Sofia Session Orchestra, Bulgarian National Radio Symphony Orchestra, Sofia Philharmonic, Cyprus Symphony Orchestra and others. Denev has conducted his original symphonic music for the British website – FPM Music UK. Denev graduated with piano from the National School of Music in Sofia, afterwards he was accepted into the Opera-Symphony Conducting program at the National Academy of Music where he graduated with a Master’s Degree and a PhD. His professors were Ivan Drenikov (successor of Arturo Michelangeli and Alexis Weissenberg) – piano, Deyan Pavlov (successor of Vassil Kazandjiev and Karl Osterreicher) and Plamen Djourov – conducting, Alexander Tekeliev-orchestration. Outside Bulgaria, Denev has studied conducting with Neil Thomson, Scott Wiss, Colin Metters and Martin Akerwall.