Kearsney College, founded in 1921, is a top independent school in South Africa for boys aged 14-18 years. Academics, sport, and the arts all function at the highest possible level and the school is renowned for its excellence and top results in all spheres. The Kearsney College Choir as it is known today was founded in 1994 and has been an important exponent of South African choral music ever since its earliest days. The choir has toured to Germany, Austria, the United Kingdom, USA, Taiwan, Japan, China, Korea, Latvia, Switzerland, Hong Kong, Singapore and across South Africa. In 2000, the choir was crowned Champions in the Folklore category at the first Choir Olympics in Linz, Austria. In 2004, during the 33rd International Youth & Music Festival in Vienna, the choir won the 1st Prize in the mixed choirs category, as well as the Prize of the City of Vienna, and then went on to Bremen and won the World Champion title at the Choir Olympics. In 2006, the choir won the 1st Prize at the Hong Kong Youth and Children's Music Competition. In 2012, the choir again managed to win a Champion Title at the World Choir Games in Cincinnati (USA), and followed this with a Champion Title in 2014 at the World Choir Games in Riga (Latvia). In 2017, the choir travelled to Singapore and won the Audience Prize as well as the Folklore category at the Orientale Concentus International Choral Festival Since its first participation at international choral events, the choir has managed to win a total of 16 Gold medals and 8 Silver medals. The choir specialises in its own, unique and energetic style of choral performance, which includes a lot of movement and dancing. 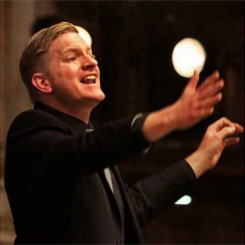 Bernard Krüger is currently the Director of Music at Kearsney College, a leading independent school for boys in South Africa. Prior to this post, he was the Artistic Director of the Drakensberg Boys Choir School – a specialist educational institution using choral singing as a vehicle to teach music and all other academic applications to boys in South Africa. He is a composer and arranger for local and international ensembles, a cappella groups, choirs and orchestras. Krüger studied conducting at the Koninklijk Conservatorium (Royal Conservatory) in The Hague, Netherlands, with Jos van Veldhoven and Jos Vermunt, and he received masterclasses from Simon Halsey, Paul Hillier, Jaap v Zweden, Tonu Kaljuste, Steve Reich, Masaaki Suzuki and Nathalie Stutzmann. He is frequently in demand for workshops at conferences and festivals in South Africa and abroad, particularly for South African choral music and performance practice and was member of the jury at the Johannes Brahms Competition (2011), the European Choir Games (2013), the World Choir Games (2014), Canta al Mar (2016) as well as competitions and eisteddfods in South Africa. In 2017, the Drakensberg Boys Choir, under Bernard’s direction, toured to Japan and performed in front of 38,500 people over 25 concerts in all major cities and in 2018, the Drakensberg Boys Choir was crowned Champions of the WCG in Tshwane in the category Scenic Pop. In 2019, Bernard led the DBC to perform at the official 20th Anniversary concert of The Lion King on the West End in London, in a joint performance with Lebo M and the cast. Bernard is no stranger to the Kearsney College Choir and worked with them from 2009-2015 as well, and during this time, the choir was twice crowned WCG Champions (2012 and 2014). Bernard Krüger is actively involved in the promotion of choral music in South Africa and believes choral music will one day be the driving force to bring peace and understanding across cultures, borders, religions and all nations on Earth.